The News-Piedmont Building became an even more dominant feature of the South Main Street
skyline after the erection of a large clock on its roof in 1947. The building was demolished in the
1970s and replaced by a new office and plant for the newspaper. 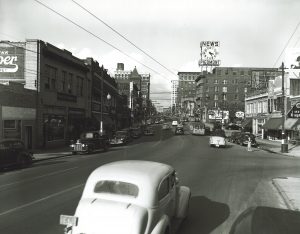 Bony Hampton Peace’s three sons, B. H. Jr., Roger, and Charlie joined their father in the newspaper
business and made the newspaper a significant feature of life in the community. The Peace family did
not confine itself to the newspaper business. In 1933 they established Greenville’s first radio station,
known by the call letters WFBC. They purchased the station license after it was relinquished by the
First Baptist Church of Knoxville, Tennessee. Thus the call letters WFBC stood for “First Baptist
Church,” although many in Greenville thought the letters were for “Watch Furman Beat Clemson.”
The call letters were later changed to WYFF’

In 1953 WFBC-TV televised its first program. Soon other newspapers and stations were acquired. In
1968 the newspaper and broadcasting operations were combined into Multimedia, Inc. 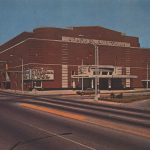 Cunningham & Cunningham: ArchitectsBuildings From the Past