By Dr. Jeff Willis
The following is an excerpt of a paper originally published in the 13 th volume of The Proceedings and Papers of the Greenville County Historical Society (2006-2014).

The history and heritage of Greenville County have been significantly impacted by the architecture of its
buildings and residences. Over the years, talented designers have contributed to this heritage. Among the
prominent architects working in Greenville during the first half of the 20 th century were the brothers Frank Harrison Cunningham and Joseph Gilbert Cunningham.

Frank and Joseph were educated in the Anderson schools. They both entered Clemson Agricultural College in September 1899. This was only Clemson’s seventh year in operation; The college opened in 1893. For five years after graduating from Clemson in 1903, the Cunningham brothers were involved in what might be considered apprenticeships. Joseph worked for J.E. Sirrine &amp; Company in Greenville. While in New York City for two years following graduation, Frank presumably worked with an architectural firm. At any rate, he retuned to Anderson in 1905 and opened a practice in architecture.

The brothers, who had been so close while at Clemson, reunited in 1908 to form a partnership in an engineering and architectural firm in Greenville. Together and separately, they executed plans for both public buildings and private residences that were praised for the beauty and dignity of their design. Their commissions were not only in Greenville, but in surrounding towns and cities as well.

One of the first commissions the new firm of Cunningham & Cunningham received was from William Choice Cleveland in 1908 to design a commercial and office building on the northeast corner of South Main Street and McBee Avenue. The ground floor was occupied by stores, the largest of which was S.H. Kress 5 & 10. The Cleveland Building was demolished in the early 21 st century. (Editor’s note: Present-day location of CVS Pharmacy.)

The brothers quickly established a reputation for themselves in Greenville. Commissions continued to mount. In 1909, St. Paul’s Methodist Church became the first in a number of churches in Greenville and the surrounding area designed by the firm. Located on a triangular space at the intersections of Pendleton and Vardry Streets, the church demonstrated the growing popularity, at the time, of the classical revival style.

One of the largest and most important commissions awarded the firm in 1911 was to design the Imperial Hotel on West Washington Street. The seven-story building has a steel skeleton frame, which carries most of the load of the floors. The walls are load-bearing masonry, not fully integrated with the skeleton frame. The Cunninghams were among the first to use this new technique. Surrounding the top is a heavy cornice supported by large, decorative brackets reminiscent of the Italianate style of Victorian architecture. Fan lights are placed above the ground-floor doors and windows. Considering the fact that the architects of this building were 29 and 31 years of age, the accomplishment was impressive. The building has been placed on the National Register of Historic Places. The Imperial Hotel was later renamed the Greenville Hotel. 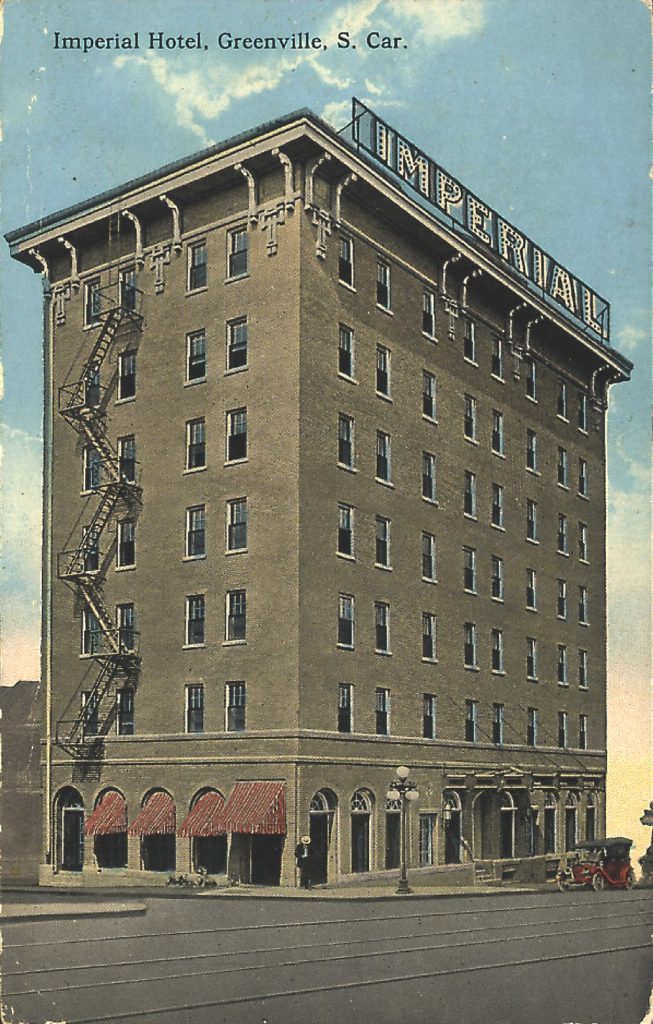 Frank Cunningham died in 1928 at the age of 48. Joseph survived his brother by 41 years and continued the practice alone until his retirement in 1956. Over the next decades, Joseph Cunningham continued to design schools and churches for Greenville and the surrounding area, including Tumbling Shoals, Pickens, Jonesville, Greer, and Travelers Rest. The most impressive of these churches is Trinity Lutheran Church on North Main Street in Greenville.

Built on high ground, the large Goth building successfully fulfills the mission of the Gothic style by giving the impression of soaring to the heavens. The width of the entrance is exaggerated by the use of three separate doors with pointed arches. Flanking the doors is a pair of buttresses, attached to the front of the building. Above the doors is a massive “west window” divided by lancets.

The last major project to which Joseph Cunningham contributed was the Greenville Memorial Auditorium on East North Street. 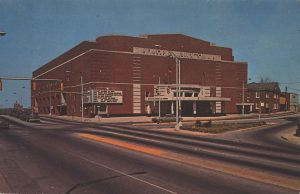 The Cunningham brothers were talented and enterprising. Their surviving homes, buildings, and churches are a testament to their ability. This account of their careers is by no means a complete study, nor is it an adequate treatment of the subject. The goal of this study has been simply to remember the contributions to Greenville’s heritage of two engineers and architects from the first half of the 20th century, and to hope that their surviving buildings and homes will remain a permanent part of Greenville’s history.

Jeffrey R. Willis was born and grew up in Greenville. He graduated from Furman University and holds M.A. and Ph.D degrees from the University of Virginia. He is the Andrew Helmus Distinguished Professor of History Emeritus at Converse College. His paper was given at a meeting of the Historical Society on February 22, 2009. 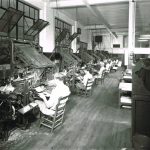 The Greenville News BuildingBuildings From the Past 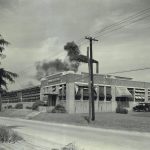